The Portland I Know: Farmers Market 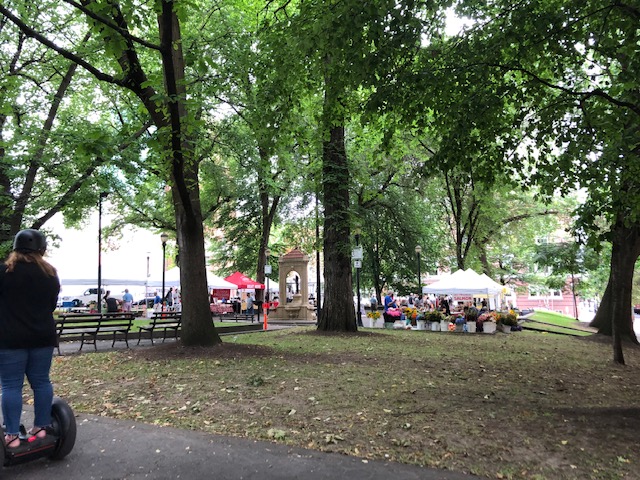 Portland has several farmers markets held throughout the city on various days of the week.  When I lived near SE 20th and Main there was one in a vacant lot. In addition to the fruit, vegatables and herbs one would expecit, that one had a vednor selling bread.

There’s one at the Portland State University campus not far from where I live.  But, the one closest to home is the one held in the South Park Blocks at SW Park and Main, putting it just 4 blocks from the Hatfield Federal Courthouse.  If you’re thinking of 4 blocks in your hometown, you may have the wrong idea of actual distance.  Portland’s city blocks are half the size of those in most American cities.  Here, it’s 20 blocks per mile instead of the usual ten.

This photo was taken July 22nd.  The only thing out of the ordinary is the spacing between vendors in compliance with social distancing necessary for doing business in the age of Covid 19.

There’s no debris from a riot, no tear gas cannisters.  Nothing is burned or damaged.  It’s just a bunch of people taking part in one of the oldest American forms of small business: Small scale farmers selling their harvest to other Americans looking for healthy, delicious locally-grown food.  The civil unrest hasn’t stopped this or many other commerce in Bridgetown.  The pandemic remains the biggest culprit when it comes to the downturn in the Portland economy.

I left the market that day with a pint of strawberries and a pint of respberries (my favorite fruit), both organice, for eight dollars.  I’ll be back–especially while berries are still in season.