A Legally Blind Guy Drew THAT

From the time I could hold a crayon, it was obvious I was a gifted artist.  I could spend hours drawing my favorite cartoon characters and scenes from my imagination.  In grade school, I was the class artist and took private lessons in junior high.  By high school, my interests had become more social as well as earning money.  Art was placed on a back burner.

I majored in advertising in college so my creativity was exercised from time to time.  There were art class electives for me to choose from and graphics classes to fulfill my degree requirement.  After graduation, art took a long hiatus.

Fast forward several years to 2001 when I was living in a funky loft apartment in downtown Little Rock.  The Arkansas Arts Center was within walking distance and I decided to see what I could do—in spite of vision loss which had left my acuity at 20/200.  I could see most things just fine, just without a crisp edge.  I decided a pastels class might be best for me.  It’s a “forgiving” medium, meaning it’s easy to fix mistakes.

This would be a good time to mention my color blindness.  I’d always had a touch of it, but it grew worse in the early 1990s when my vision started its downhill slide.  Now it’s very hard for me to tall apart dark shades.  This class was going to be interesting for me, entertaining for my classmates.

The teacher, Dominique, was very patient with me.  In spite of my vision, my skill was right where it had been when I was a kid.  With guidance and practice, it improved to a higher level than it had ever been.  Nine years earlier, with my eyes covered in bandages after surgeries to remove hemorrhages, I never would have imagined I’d be doing this.

Dominique taught a figure drawing class the next session.  I had taken a class previously in college, but that was before 500 hours of anatomy and physiology class in massage therapy school.  I wondered what it would be like to draw people after knowing what muscles look like under the skin.  And because I had worked on so many different body types, I knew what they felt like, which would make it easier get the texture right.  One of the things I love about working in charcoal and pastel is using my fingertips to soften and blend the edges of an image.

My hunch was correct.  This came easy for me.  My limited vision didn’t slow me down at all.  As you may have guessed, the models were young, attractive, and nude.  No, I wasn’t there for a cheap thrill.  Art lessons aren’t the cheapest way to get a thrill in the age of the internet.  Needless to say, I did endure some teasing from my friends, though they were impressed when I showed them my work.

Fast forward again to September, 2010.  Since 2003, my vision has hovered around 20/400, so I haven’t been doing much art.  That doesn’t mean I wasn’t interested.  I had a feeling that in spite of, or maybe even because of, my current vision I could create some interesting works contrasting light and dark.  I heard about an open figure drawing session at The Fayetteville Underground, an artists workspace in an old bank building downtown.

With old art supplies in hand and almost no self-confidence, I went to check it out.  I had called the number provided in the NPR announcement and had spoken to a nice gentleman about model fees, times, stuff like that.  I mentioned I’m visually impaired.  It’s always a good idea to let someone know ahead of time in any new situation—especially if a nude model is involved.

The room had glass walls and door, so draperies hung just inside to make it private.  I went in, pushed through the curtains and saw about ten or twelve artists at work.  When I tried to follow their gaze to get some idea how close to the model I might set up, I saw . . . no model.  At the Arkansas Arts Center the model was usually in the center of the room, so that’s where I looked.  Tentatively, I walked between the easels, trying not to get in anyone’s way or clumsily knock something over.  I suddenly felt very self-conscious, probably even more so than the unclothed model—wherever he or she might be.

This was a bad idea.  You can’t do this.  What made you think you could do this?  Face it, you don’t see well enough anymore.  Get out of here.  This isn’t for you.

I started groping for the break in the curtains so I could get out of there.  It was obvious I needed help, which someone offered to do.

“I can’t see well,” I muttered in a tiny voice, keeping my head down.  I felt like a fly working its way to the slightly opened car window.  Once I escaped, the others would remember me as the blind guy who wandered in that time, if they thought of me at all.

“Yes, I spoke to you on the phone,” he said.  Then he helped me find a place.  There was a man seated lower than everyone else.  He was clothed but I thought he must be the model, but he didn’t have light shining on him.  He was in the dark.“I don’t know if there’s enough light,” I said, pointing at the ceiling above.

“Maybe you should look over here,” he said, indicating someone behind me who stood on a platform about two feet from me.  The model’s back was facing me.  All I saw was lean, pink flesh and I felt very embarrassed.

Because I needed to be rather close, I was near the stage, at one end of the horseshoe-shaped array of artists setup around the room.  The model’s arms were raised and I couldn’t see a face or other features determining the gender.  Something about the raised arms suggested femininity and I started to draw.  It was rough at first, but it was coming back to me.  Maybe I would get through the evening without feeling stupid.

The model changed to a different pose.  And HE turned out not to be feminine at all, but an athletic young man who could come up with artistically interesting poses, most of which were lost on me due to my vantage point off to the side.  If it was a pose I just couldn’t draw, I took the opportunity to walk around the room and look at everyone else’s work.  It encouraged me to find that my drawing didn’t compare unfavorably to theirs.  Maybe I could still do this after all.So I went back in October.  This time there were two models—one male and one female.  It was hard for me to draw both in a single pose.  It was, after all, only my second time back after several years.  So I usually drew one or the other.  This time, I used white pastel on black paper.  It’s easier for me to draw light onto dark, probably because my vision is slow to adjust to abrupt changes in light.  Whenever I enter a dark room, the lightest or shiniest objects take shape first, followed by the next brightest.  My world literally comes out of the dark.

Here’s a photo of the piece I’m proudest of from that night.  She only held the pose for 20 minutes.  At the end of the session, other artists were surprised to find out I’m legally blind.  I LOVE that feeling!  It’s one thing for people to be impressed by my accomplishments when they think I can see as well as they do.  When they find out that I can’t, they look at me in a while new way. 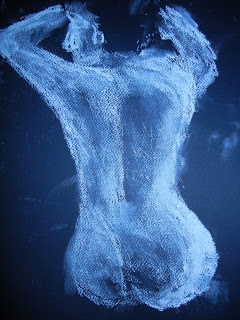